A journey beyond the horizon 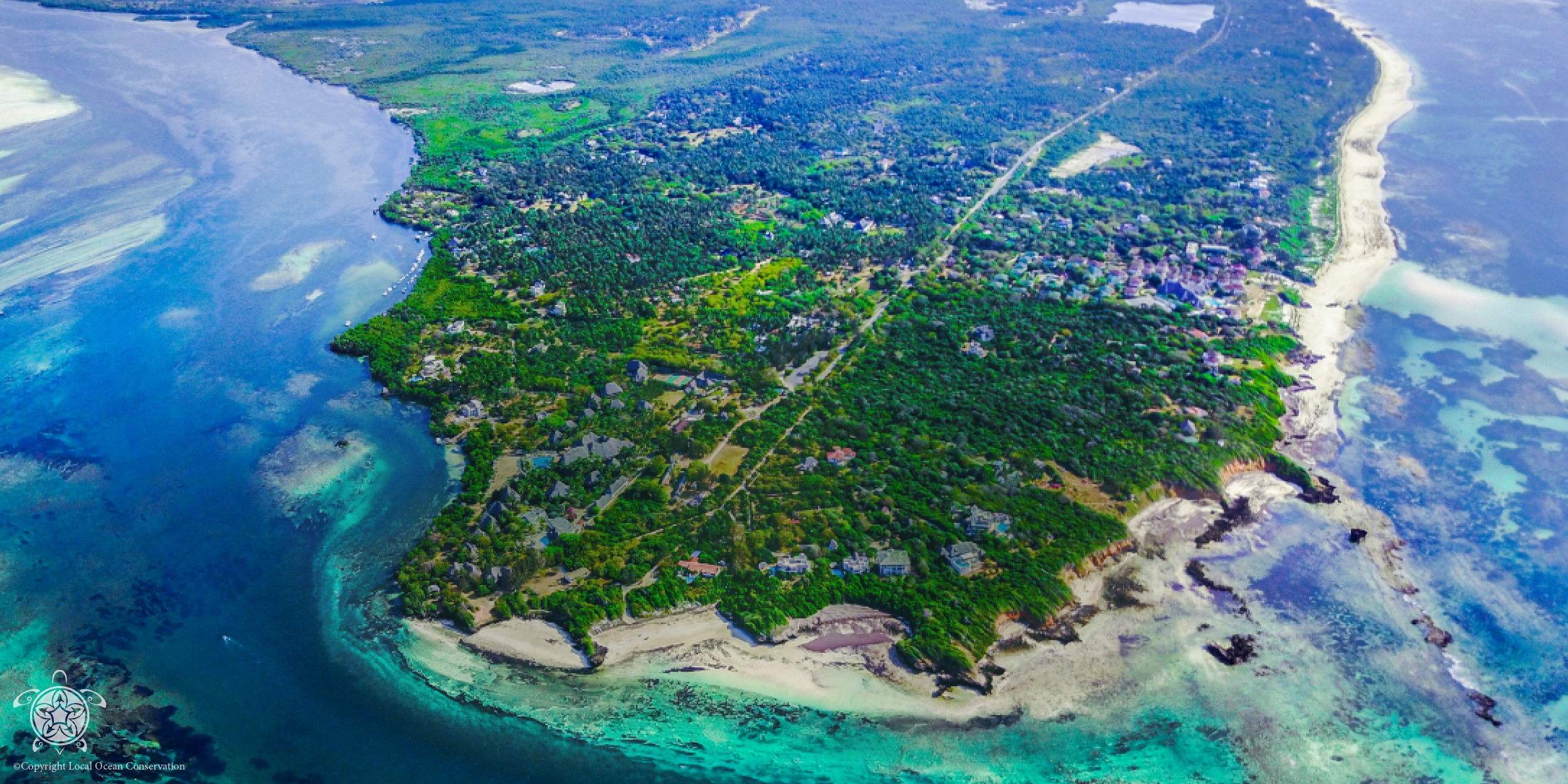 Watamu is situated in Kilifi County,  along the Kenyan coast and is home to protected areas such as the Watamu National Marine Park and the Arabuko Sokoke Forest.  Watamu is well known for  the sea turtles that nest on it’s beautiful beaches and forage for food in the renowned Mida Creek and Marine Park.

Of the 7 sea turtle species in the world, 5 are known to the Kenyan coast.  These species are the Green, Hawksbill, Olive Ridley, Loggerhead and Leatherback turtles.  Local Ocean Conservation (LOC), a marine conservation organisation based in Watamu has for the last 20 years has collaborated with Kenya Wildlife Services in protecting the mainly green nesting females laying their eggs in the Marine Park beach, monitoring and protecting the nests until the hatchlings emerge and scurry to the ocean. Along with the protection of accidental bycatch of Hawksbill turtles who forage in creek and ocean.

Through our Bycatch Release Programme, turtles accidentally caught in fishermen’s nets have been safely released back into the ocean and saved from being killed for their meat and oil.

Over the years, we have been able to collect data that can be used to give us insight into the growth, migration and nesting of these sea turtles.

Sea turtles are recognised for their migratory behavior due to  foraging and nesting in different areas, with their migration pattern being determined by seasonal changes which affect water temperature among other factors. Sea turtles can migrate over hundreds and even thousands of kilometres from different oceans and continents in different times of the year! This article highlights one such case. Where a juvenile green turtle swam all the way from Watamu, Kenya to Aldabra Atoll in the Seychelles.

A journey of at least 950 km. They sure know how to get around!

This was a fascinating discovery which was made possible due to the tagging programmes by two organizations. Local Ocean Conservation in Kenya and Seychelles Islands Foundation in the Seychelles.

A migratory snapshot is emerging between Kenya and the Seychelles in the West Indian Ocean. 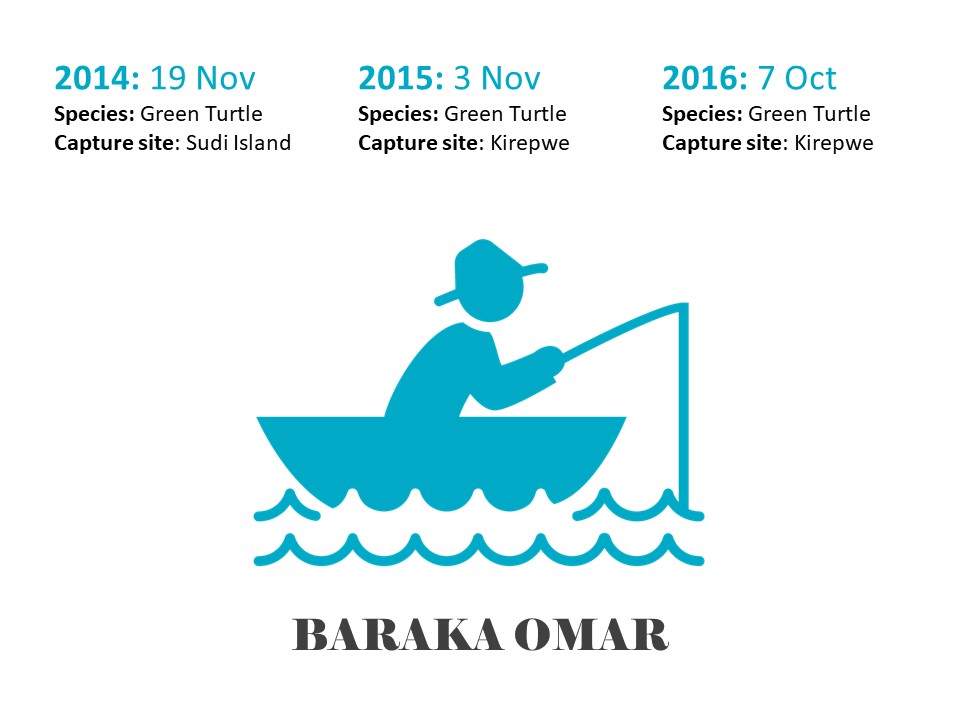 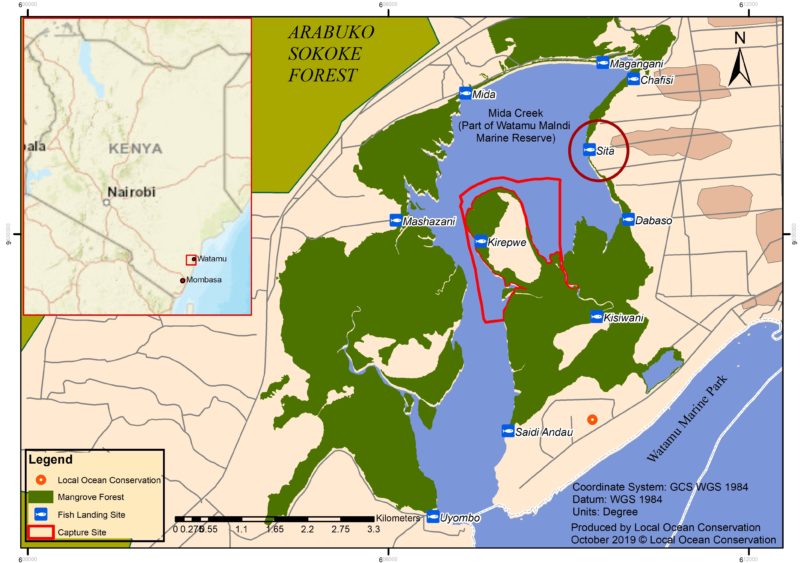 Since the inception of the Bycatch Release Programme, LOC has interacted with 1,949 fishers, with 207 fishers being active in 2019 thus far.

Mr Baraka Omar, is one such local fisher and he had been active in our Bycatch Release Programme for three consecutive years; 2014, 2015 and 2016. All of which were during the months of October and November and in the Mida Creek of Watamu.

In the early morning of 3 November 2015, Mr Omar captured a juvenile green turtle in Mida Creek near Watamu, Kenya. Our Bycatch Release team was notified by Mr Omar and the turtle was landed at Sita landing site. Our team, lead by Fikiri and accompanied by our eco-vistors went to attend to her.

As part of LOC’s protocol they assessed the turtle’s health as ”good and generally clean” and the only issue being “tip of Rear Right Front flipper being frayed”. Key measurements such as the dimensions of the carapace (shell) and weight were taken. Followed by photographs and tagging on the left rear flipper, with tag number KES0113. The juvinile green turtle was then released into the Watamu Marine Park.

LOC runs a ByCatch Release Programme in collaboration with Kenya Wildlife Services and the local fisherman.

This is the first time that a juvenile green turtle has been found to swim from the continental coast to the Seychelles. 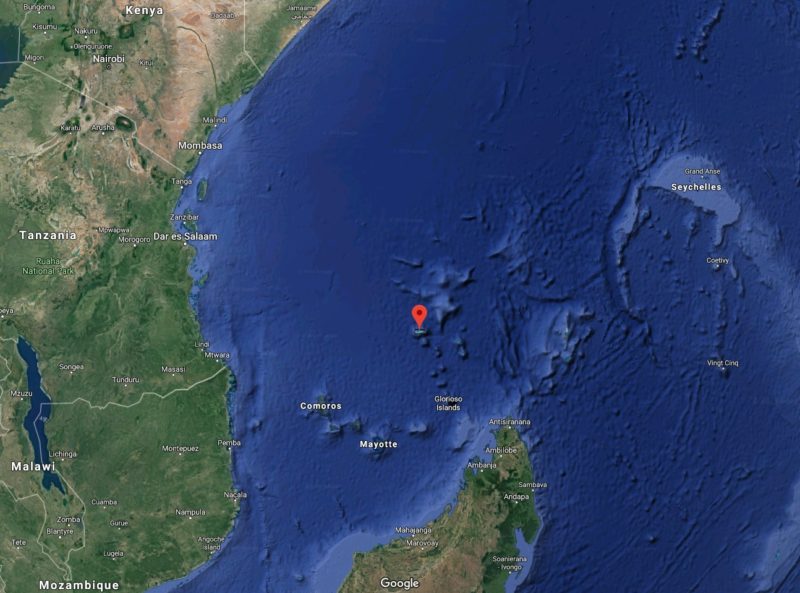 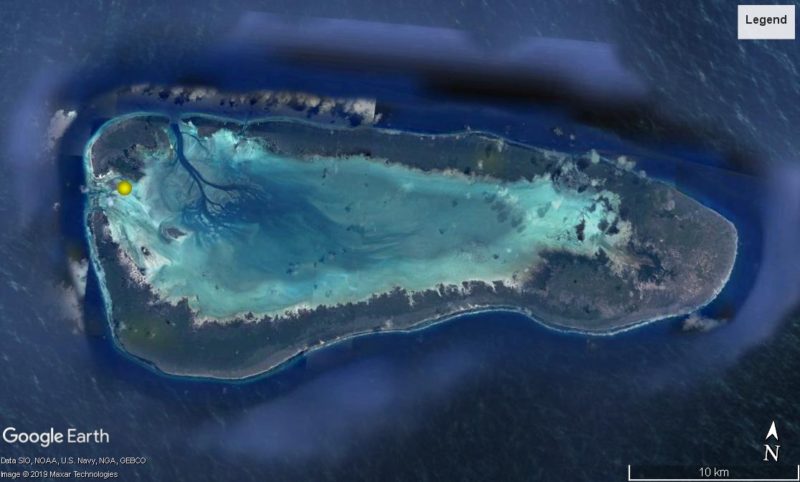 Location of recapture in the lagoon of Aldabra Atoll, Seychelles

Aldabra Atoll is a UNESCO World Heritage Site managed by Seychelles Islands Foundation (SIF); the coral atoll is 1,100km from the main island, Mahe, and is 400km from Madagascar.

The atoll consists of four main coralline islands which surround a shallow interior lagoon. A small team of permanent staff (typically 10-15 people) live at a research station for research and conservation purposes. The Aldabra in-water turtle monitoring program began in 1986, prior to SIF management, and has been part of routine monitoring predominantly in the lagoon since 1996.

When caught on one of these in-water sessions, the same key dimensions were measured and a weight of 45.5 kg was recorded. As per protocol, LOC’s tag was recorded and the turtle was given two new tags on the left and right front flippers (tags E4955 and E4954 respectively).

We live in a connected world

While adult green turtles have previously been found to transit between the Seychelles and Kenya and there has been evidence of nesting females from Seychelles returning to foraging grounds along East Africa as well as adult turtles nesting in the Chagos (East of the Seychelles) using the Seychelles as a resting ground before returning to foraging grounds in East Africa. This is the first account that we know of for a juvenile green turtle to carry out this migration, reinforcing the connection between West Indian Ocean countries.

The recapture also underlines the value of tagging programs, strengthens the importance of partnerships within wider regions, and also brings hope to conservation efforts already in place. 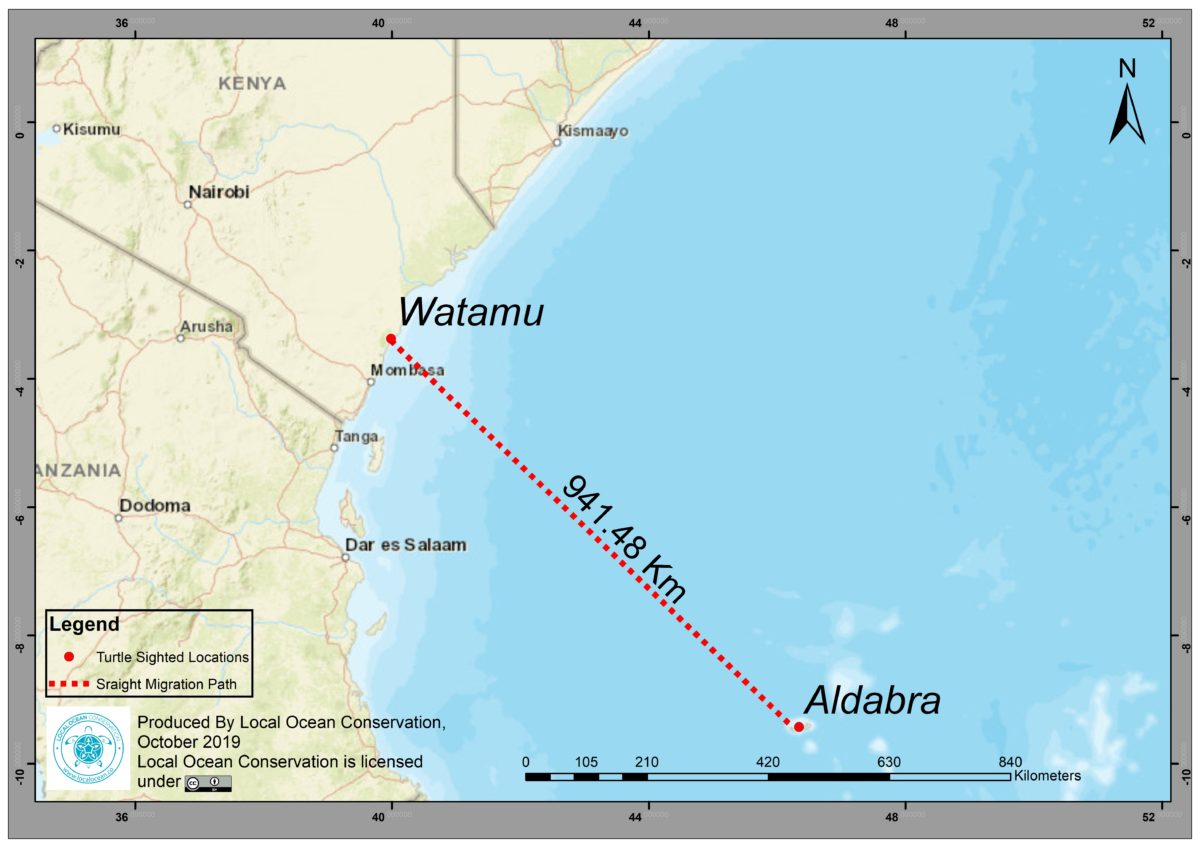 The minimum distance covered by the juvenile green turtle from Watamu, Kenya to Aldabra Atoll, Seychelles 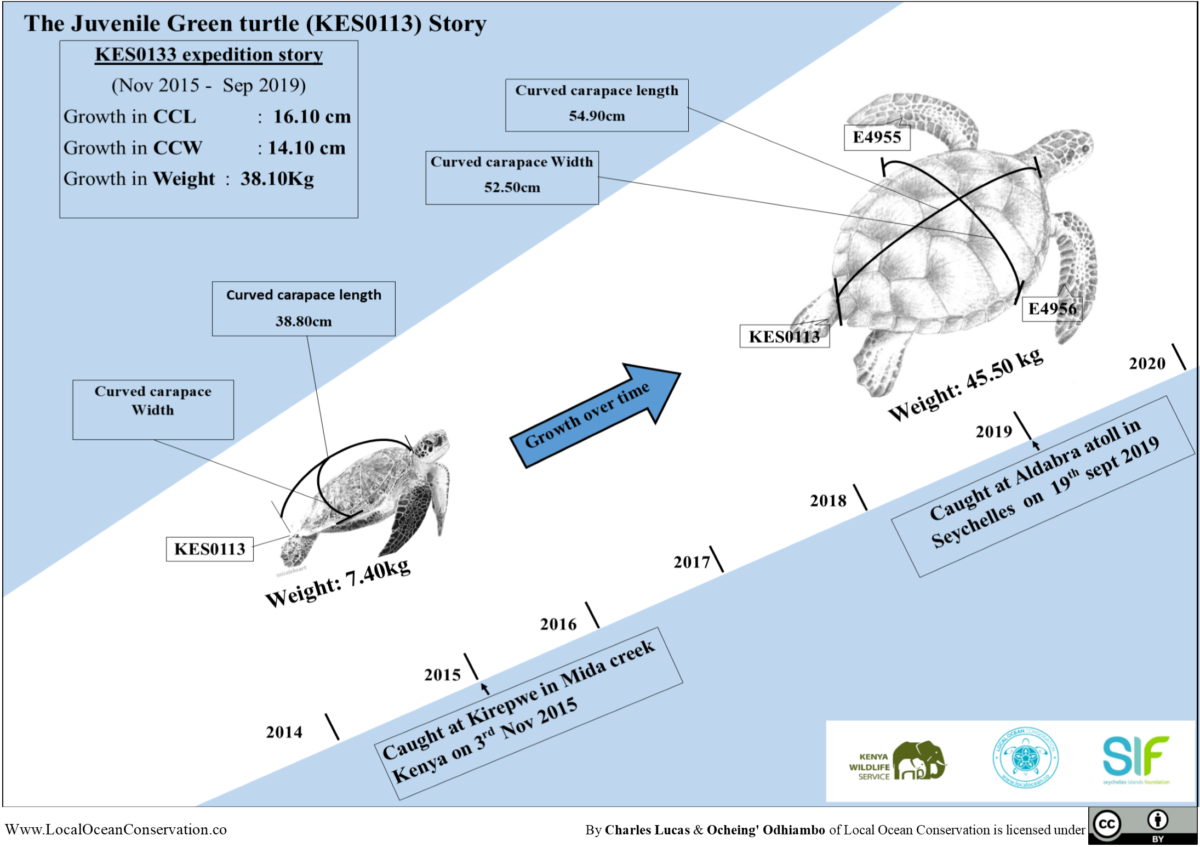